The Manx Year, albeit with some minor adjustments, was a singular opportunity to reflect on a whole host of cultural celebrations through the medium of music, song, poetry, dance and drama.

Held at the Centenary Centre in Peel, the evening’s entertainment was compèred by Annie Kissack, well known to many in the Manx cultural circle and beyond, more particularly since her year as the Manx Bard.

Its production was presented in a sequential fashion, beginning with the Invocation of St Bridget sung by Ruth Keggin – before celebrating Candlemas and the Easter with local dance group Perree Bane. Hot on its heels came both the eve of May Day and May Day itself, with Tynwald Day balancing the year. But it wasn’t long before Michaelmas and Hop tu Naa announced that summer was at an end and the festive season would bring its own pleasures with a peculiarly Manx twist. 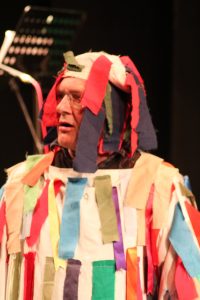 Many of the performers typically feature in concerts, parochial gatherings and festivals throughout the year, both on and off the Island.