Kelly McCarthy Posted on May 6, 2013 Posted in Uncategorized 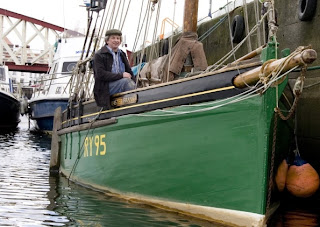 When I was staying in Ramsey recently, I kept seeing a fine old boat boasting the traditional red-brown sails of the Manx nickies and nobbies. It turns out that she is called the “Master Frank.” Here’s a report from iomtoday written two years ago when she turned 115 years old.

The Master Frank is the island’s longest-surviving half-decker. Records differ as to whether she was built in 1893 or 1895, but the Ramsey Courier’s maritime correspondent, A.H. Curphey (grandfather of historian and author Constance Radcliffe), recorded that she was launched on January 29, 1896, and said: ‘She is very strongly built and bids fair to be a good, useful boat.’
Measuring 40ft overall, Master Frank was built by Messrs. Clucas and Duggan, shipwrights, boat and canoe builders and block and spar makers, whose yard was at the rear of Marsden Terrace, Ramsey. She was commissioned by Mr W. Shakley, a Whitehaven boat owner and fish dealer, who named it after his son.
After only three months she was purchased by the Kinnin family, who brought her back to Ramsey. They fished mainly for cod, using a long-line. She remained with them until 1964 when Willie Kinnin sold her to Charlie Gaines.
The Kinnins repurchased her in 1969, keeping her until 1976 when she was sold to Captain Stephen Carter, who was the last person to fish her commercially. In 1978, he sold her to Phil Kelly and Dave Richards, both teachers at Albert Road School.
In 1986, they sold her to the Manx Heritage Foundation, which had plans to restore her as a Heritage Year project. The plans failed to bear fruit and she lay in Ramsey for two years before being taken to Peel.
There she sat in the boat park until July 1993, an increasingly sad sight, until she was offered to the present owner Joe Pennington, a master carpenter, who paid a nominal price and began an extensive restoration programme.
After three years of unstinting labour, the lovingly restored vessel was relaunched in the spring of 1996.
She is generally moored in Ramsey harbour, opposite the Farmer’s Combine and Joe takes her out for a sail whenever the weather and his work schedule allows. 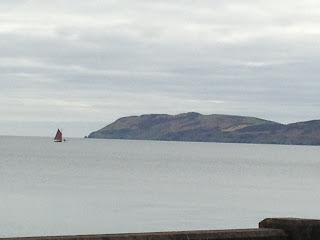