IN the days of our grandmothers, Old Christmas Day, the fifth of January, was believed to be the true Christmas. On Black Thomas’s Eve, which was the first day of the Christmas holidays, the spinning wheels all had to be put away, the making of nets ceased, and no work of any kind must be done until after Twelfth Day.
But there was once an old woman named Peggy Shimmin, at Ballacooil, and she was bent on finishing some spinning that she had begun, so on Old Christmas Eve she said to herself :
‘The New Christmas is pas’ an’ surely itis no wrong to do a bit o’spinning to-night,’ though she doubted in her heart if she were not sinning. So when Himself and the rest were in bed, she called her young servant-girl, lil Margad, and said
‘Margad, me an’ you will finish the spinning to-night.’ Margad was frightened, terrible, but she got out her wheel and sat beside her mistress. The two began to spin, and they were spinning and spinning till near midnight, and behold ye, just before midnight old Peggy saw the flax she was drawing from the distaff grow blacker and blacker till it was as black as tar. But Margad’s flax did not change colour because she had only done what her mistress bade her. Peg dropped the flax quick, put away her wheel, and crept in fear to bed. She knew now which was the true Christmas Day and never more did she spin on Old Christmas Eve.
Margad was left alone in the kitchen when her mistress had gone to bed, and at first she was trembling with fright; but she was a middling brave girl, and she took a notion, as there was no person to stop her, to see if all the things were, true that she had heard about Old Christmas Eve.
‘They’re saying,’ she thought, ‘that the bees are coming out, an’ the threeyear-old bullocks going down on their knees, an’ the myrrh coming up in bloom.’ Then she says to herself : 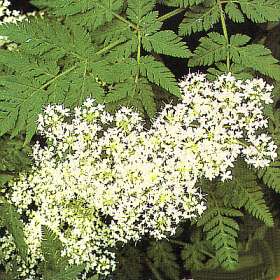 ‘I’m thinking I’ll go out an’ watch the myrrh.’ So she put a cloak round her and crept out at the door into the cold frosty moonlit night, and midnight had just struck as she put her foot outside. She stooped to look on the spot where the myrrh root was buried, and as she was looking, the earth began to stir and to crack, and soon two little green shoots pushed up to the air. She bent closer to see what would happen, and to her great wonder the leaves and stalks grew big and strong before her eyes, and then the buds began to show, and in a few minutes the lovely white flowers were in bloom and the garden was sweet with their fragrance. Margad could do nothing but stare at them at first, but at last she dared to gather one small piece of the blossom, and she kept it for luck all her life. Then she went to the cowhouse and peeped through the door. She heard a groaning sound and there were the young bullocks on their knees, moaning, and the sweat was dropping from them. Margad knelt down, too, and put up a bit of a prayer to the Holy Child that was born in a stall. But the wonders were not over yet, for as she went silently back to the house she noticed that the bees were singing and flying round the hive-they were inside again, when she shut the door of the house behind her.
Always after that, when the neighbours would ask her if she believed in the wonders of the Old Christmas Eve, she would say:
‘I know it’s true, for I’ve seen it myself.’