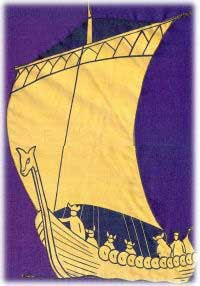 The Blue flag with the representation of a Viking warship was adopted only relatively recently in the history of Tynwald.

The design of the ancient arms of the Kings of Man depicted a ship with sails furled. This heraldic device with the motto Rex Manniae et Insularum was adopted by King Maccus, who commanded a powerful fleet for which a ship was an appropriate symbol, after he and several other regional kings agreed with the English King Edgar not to attack each other on land or sea. The agreement was symbolised by rowing a small ship on the River Dee in 973 with Edgar, who was only slight in stature, taking the rudder while the other kings rowed.

In heraldry, the usual device to show a maritime connection is a lymphad galley. This device was included in some of the seals used by later Kings or Lords of Man, and can be found carved in the detail on the Speaker’s chair in the House of Keys, as well as in the design incorporated in the rear windows of the chamber.

However, this bore no relation to the ships used by the Viking Kings of the time or later. Such royal warships (since Godred Crovan’s time no one other than the king was allowed to have 26 oar ships) had crews provided by those who supported, and were given positions of importance by, the King of Man.
Warships would be used by the King of Man to enforce his authority and defend his territory, as well as for loaning out of the ships and crews to other regional Viking kings for their purposes, usually for a cut of the spoils and profits. As subservient (at times) vassal kings, in times of great conflict the suzerain King of Norway required the kings of such regions, including the King of Man, to provide a minimum number of warships and crews to aid Norway’s throne and its ambitions.

The appearance of the Viking warships on the coasts of disputed territories would strike fear into the coastal inhabitants,and would become such a strong symbol that it would survive in writings and folk tales in the centuries that followed up to modern times.

So when in the late 1960’s the Tynwald Ceremony Arrangements Committee decided that an appropriate flag should be flown at the annual Tynwald Day Ceremony, it was decided that it should incorporate an authentic Viking Warship in full sail.

The Legislative Council Chamber has such a design in its rear window, and the reverse of the Manx 10 shilling/50p notes of the time provided such a design drawn by Mr John Nicholson, who was consulted concerning the emblem for the flag.

Wing Commander Roy MacDonald MHK had made the original suggestion for the adoption of such a flag when MHK for Peel in 1966, and his contemporaries would often refer to the flag as the (Roy) MacDonald flag, though it should not be confused with the symbol of the Scottish (Mac)Donald clan. The ship design used by the latter is a nyvaig or birlinn, only one third the size of a Viking warship, incorporating a rudder rather than the Viking steering oar.

These two types of ships would come together to decide the fate of part of the Isles off Scotland. In the confined waters of the Sound of Islay a night-time sea battle was fought between the numerically superior, but in naval terms inferior, force of birlinns of Somerled, King of Argyll, and Godred, King of Man, in January 1156.

Somerled, who was married to the daughter of Olaf, the former King of Man, was attempting to replace Godred with his own son. The battle saw the forces fight to a standstill, and, though Godred remained King of Man, that part of his kingdom known as the Islay and Mull groups were lost to Somerled, whose descendants would style themselves “Lords of the Isles”.

The Viking warship would remain a powerful instrument of the power of the Kings of Man until the battle of Largs in 1263, where King Magnus of Man went to aid the Norwegian King. Due to storms, the combined fleet was severely damaged and the Norwegian fleet retreated to Orkney, only for the Norwegian king to die there. Magnus did subservience to the Scottish king only to die a short time later as the last of the Norwegian derived Kings of Man in 1265.

As Manx historian A W Moore would put it “Thus came to an end a momentous epoch in Manx History,and one in which Man was, comparatively speaking, more important than either before or after it”.

The Parliamentary Flag of Tynwald harks back to those times, the enduring symbol of the Viking warship is particularly fitting as Tynwald has survived as the world’s oldest continuous parliament, many aspects of which have their origins from the Viking Age.