Isle of Man Railways received further recognition of the Island’s historical network recently with the award of three Red Wheel plaques by The Transport Trust.

Seventy members of The Transport Trust were on the Island as part of their fiftieth anniversary celebrations, enjoying a packed itinerary and a number of talks.
This included journeys on the Isle of Man Steam Railway, the Manx Electric Railway, the Great Laxey Mine Railway, the Snaefell Mountain Railway, vintage buses and the Douglas Horse Trams.
In addition, members of The Transport Trust travelled by bus around the TT course and visited the newly opened Isle of Man Motor Museum and the Jurby Transport Museum.
Evening events featured talks by the Director of Public Transport, Ian Longworth, former National Railway Museum Director (UK), Colonel Steve Davies, land speed record holder, Richard Barks and steam enthusiast, Chris Wedgwood.
The highlight of the trip for eight lucky members of the group was the opportunity to ride on the foot plate of one of the Island’s steam trains.
Equivalent in railway terms to the more well known Blue Heritage plaques, the first one was unveiled by the Director of Public Transport, Ian Longworth, at Douglas Railway Station. 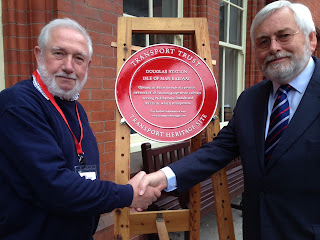 Mr. Longworth commented, “This is a huge honour for the Isle of Man and is recognition for the Isle of Man Government’s significant investment over many years in our three heritage railways.”
Further Red Wheel plaques were unveiled at the Manx Electric Railway terminus by Lord O’Neill, Vice President of The Transport Trust, followed by the final ceremony at the Manx Electric Railway Station at Laxey by local historian and tram enthusiast Andrew Scarffe, in honour of the Snaefell Mountain Railway.
The Transport Trust works as a charity to promote the preservation and restoration of heritage transport in the British Isles.
Valerie Caine