The Tynwald Club – The Manx gather as German POWs

Kelly McCarthy Posted on February 15, 2012 Posted in Uncategorized
From: The Queensland Manx Society’s Feb 2012 newsletter.
This is an astonishing story that comes to us from the grim reaches of World War II. Thanks to the Queensland Manx for sharing it with us through their newsletter.
THE TYNWALD CLUB
Norma Conwell entertained us with the following story at our Aussie Celts Christmas Luncheon.
Here we are together again enjoying a Manx Society gathering, this time having an Aussie Celtic Christmas with our Cornish Association friends. Aren’t we glad we can enjoy this freedom and come together for our Manx Society meetings? Today I’d like to share a story with you of another Manx Society, which managed to meet under extremely oppressive circumstances.
This Manx Society was called “THE TYNWALD CLUB”
It is the fascinating story of a Manx Society which flourished in a prisoner of war camp in the heart of Germany for more than two and a half years, and was told to an annual Tynwald Day Gathering of the World Manx Association, at Douglas, by Bombardier Arnold Forrester. He was one of the founder members of this unique Society, which bore the name of The Tynwald Club. It was formed in 1942 by 20 Manxmen in Stalag 383 situated at the foot of the Bavarian Alps, 33 miles from Nuremburg.
Company Sgt. Major Harry Qualtrough was elected president, Sergt. Curwen Clague, Secretary, and Sgt. J. Manderson Treasurer. Most of the members belonged to the 129th Battery of the Manx Regiment, but Sgt Major Qualtrough was Senior W.O. of the Durham Light Infantry. Although he had not seen his home in St. John’s for some years and had spent most of his life abroad, he was, said Bombdr. Forrester “as Manx as any of us” and by his splendid example and sympathetic understanding did much for their morale in those dark days. He got them their hut and from then on Wednesday night was Tynwald Night.
In that hut in the evenings they would draw the curtain across the window, which looked out across the muddy wastes, the tumbled down huts, the high barbed wire fence, the lookout towers and the searchlights. They would shut out the present and dwell awhile on the past, returning in their thoughts to their loved ones at home. News from home was of paramount interest. A letter to one, if it contained news of people and events was a letter to all. Cigarettes were the currency of the camp and with them one could buy almost anything from a shirt to an accordion. Each member paid two cigarettes a week to the treasurer and so created a fund which enabled them to have a light meal in the true “Manx Tay” traditions and also supply any of their members in hospital with extra cigarettes.
Sometimes an Australian, a New Zealander or a Palestinian would give them a lecture on their home country and in return Sgt. Norman Cowley would be invited to give a talk on the Isle of Man. On two occasions his audiences numbered over 1000 men. In addition, he spoke at every club in camp, repre- senting almost every district in Britain. There were over 7000 men in Stalag 383 and by the time Sergt. Cowley had finished with the whole camp, it was Isle of Man conscious. 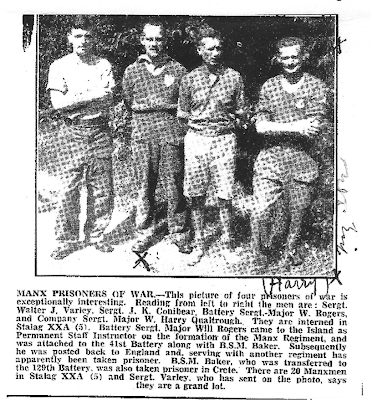 This is a photo of 4 of the Manx prisoners of war that was in The Isle of Man Examiner. It can be found on the internet in the Qualtrough Family Tree web site. Company Sergt. Major W. Harry Qualtrough is on the right marked as Harry with an X.
The newsletter team can be contacted on 07 3886 3020 or manxnews@gmail.com
PO Box 2363, Chermside Centre, QLD, 4032 Further information about the QMS is available on the website at queenslandmanx.org.au Facebook group: Queensland Manx Society;
Flickr: www.flickr.com/photos/queenslandmanx/
The official newsletter of the Queensland Manx Society Inc. Serving the Manx community continuously since 1914.