Aptly titled, and a treasure trove of information, this book was originally published to celebrate the centenary of the first Parish Walk on the Isle of Man.

Billed as one of the toughest sporting events on the Island, those taking part are required to visit each of the seventeen parish churches within twenty four hours, and attracts competitors not only from the Isle of Man, but from the British Isles, Europe and further afield. 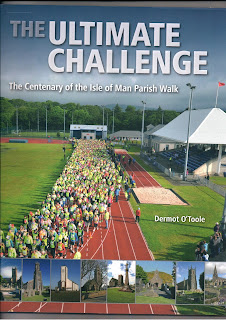 Written by one of the event’s competitors, Dermot O’Toole, this extensive read reveals both the highs and the lows of this unique Manx event; tracing its history from the inaugural race in 1913.
A highlight of the Manx sporting calendar, Dermot’s book also includes a series of interviews with competitors, biographies of some of the main challengers and over two hundred photographs.
But it also introduces us to some of the early pioneers of long distance walking on the Isle of Man, including the remarkable exploits of a man named Kinry who planned to run naked between Douglas and Bishopscourt, but died on the return journey. Other notable figures include John Cannell of Douglas and Receiver General, Colonel William James Anderson MHK, who perhaps more than any other set the scene for the Parish Walk as we know it today.
The Parish Walk came to a halt in 1924 and was revived in 1960, but many of the historic photographs reflect a different approach, as competitors dressed as if going out for a Sunday stroll, rather than an eighty five mile endurance test!
Others arrived straight from work and in later years women joined their men folk at the starting line.
Dermot’ book is the definitive story of the remarkable Parish Walk and is available from Lily Publications priced £18.95.
www.lilypublications.co.uk
Valerie Caine