Kelly McCarthy Posted on September 16, 2012 Posted in Uncategorized
From the BBC
As Chris Allix approached his 60th birthday his doctor told him to “lose a little weight”.
His response? “I thought why not kayak to Monaco?”
Speaking from his kayak near Cannes, in the French Riviera, the Isle of Man company director is now six stone lighter and just days away from completing his 2,000-mile journey.
“If you are going to lose some weight you may as well have an adventure,” he said
“I was nearly 20 stone when I saw the doctor and last time I weighed myself I was around 14. I think the doctor will be happy.”
When Mr Allix came up with the idea, everyone, including his partner Catherine, thought he was mad – but it just made him more determined.
“I used to canoe when I was younger,” he said. “So the next step was to seek the help of an expert and get a training regime.” 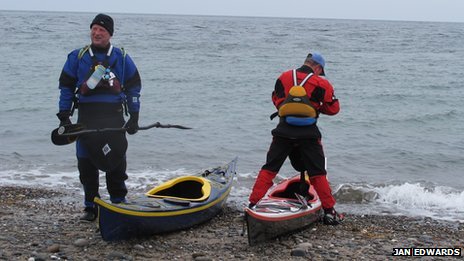 The epic journey began at the Point of Ayre in the Isle of Man in June
Keirron Tastagh, of Adventurous Experiences, said: “I received the phone call from Chris and he told me his idea.
“I thought it was ambitious but brilliant. It is one thing to come up with an idea like that but another to see it through.
Continue reading the main story

It was never going to be a speed challenge, more a test of endurance and it has been life changing”

“We spent 12 months on his fitness and skills and I watched his confidence grow.
“He is one of the most determined people I have ever met and it is remarkable to see what he has gone on to achieve.
“Kayaking to Monaco has to be the ultimate weight-loss regime.”
Mr Allix began his journey from the Point of Ayre on 26 June and was joined on the first leg to Whitehaven in Cumbria by Mr Tastagh.
He celebrated his 60th birthday this week and said: “I had a number of emotions on the first leg but it was mainly excitement. It was great to have Keirron with me.”
From Cumbria he navigated his way to Dover via a network of canals and rivers.
His journey was interrupted however when he was refused permission to enter French waters. 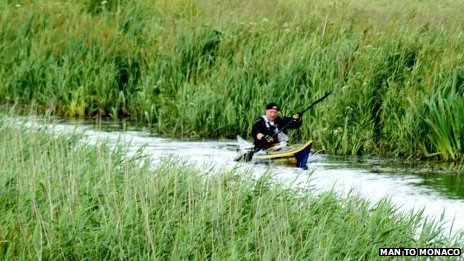 Mr Allix has battled with weather, tiredness and fatigue throughout his journey
In the end, under escort, he paddled half-way across the Channel to the French border but was not allowed to complete the crossing and so had to resume the kayak challenge after arriving in France by ferry.
His partner Catherine said: “He has had so many hurdles and difficulties to overcome and he keeps on surprising us all.
“We are all incredibly proud of him and what he has achieved.”

Mr Allix is currently working his way to Monaco along canals and rivers in France and is hoping to time his arrival for the opening day of the Monaco Yacht Show on Wednesday, 19 September, 78 days after he set off.
“It’s been an immense adventure so far and the target is in sight,” he said.
“It was never going to be a speed challenge, more a test of endurance and it has been life changing.
“It has been incredible going for miles without seeing a building, let alone a village. There has been plenty of time to think.”
So far Mr Allix has raised thousands of pounds for five charities – the Isle of Man-based Sailing for the Disabled, Namaste Children’s House in Nepal, the ICM Charitable Trust, the Outward Bound Trust in Monaco and the UK-based Encompass Trust. 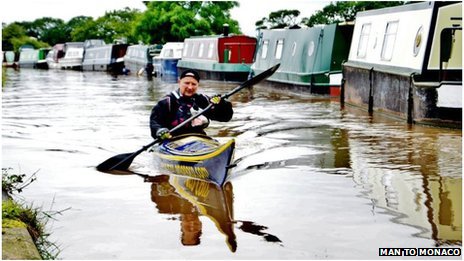 The final stop on the trip is the Monaco Yacht Show