↓ Skip to Main Content
Home › Uncategorized › The Voyage of Odin’s Raven — Remember that?

The Voyage of Odin’s Raven — Remember that? 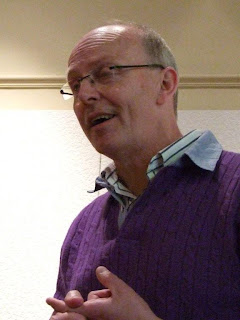 The first talk of the year organised by the Friends of Manx National Heritage charted the progress of the remarkable journey made by the replica Viking ship ‘Odin’s Raven’ during the celebrations of Millennium Year in 1979. Held within the House of Manannan this fascinating story of life on the high seas was brought to life by Nigel Wood, one of the original crew members, who gave an insight into both the selection process and the sea journey itself.

Whetting the appetite with a little history of the Viking Diaspora and why the Isle of Man became such an important settlement, Nigel revealed that originally the idea of recreating the journey was looked upon as a gimmick. The concept of Robin Bigland in 1978, he had everything in place in less than 12 months, including raising the £100,000 needed to get the project off the ground and out to sea.

Based on an original chieftain’s vessel ‘Odin’s Raven’ began to take shape, and the hunt for the Manx part of the crew was put into motion. Receiving 400 replies from eager applicants from around the world this was soon whittled down to 25 people, selected because of their skills, background and compatibility. A tough training schedule, both mentally and physically, was enforced by Shane Lucas in deliberate preparation for what was going to be a tough ordeal for the final 7 chosen for the voyage.

A mixed crew from Norway and the Isle of Man they lived together cheek by jowl in very cramped conditions, little personal space and even less privacy; the expression ‘bucket and chuck it’ self explanatory. A test of endurance in such living conditions food became very important to them as did the tot of rum administered each day.

As they began their journey of 1800 miles large crowds, together with enthusiastic Norwegian bands, gathered at the quayside to wish them well as they headed out to sea, the crew testing out an early version of GORE-TEX® during parts of their journey. Obliged to wear Viking attire from time to time the crew, armed to the teeth, malodorous and reverting to animal tendencies, met with an excited King of Norway with no visible security!

The voyage of ‘Odin’s Raven’ became a journey of personal development and achievement; interspersed with highlights and lowlights such as the unexpected arrival of a Fortnum and Mason hamper in Shetland, and the disastrous moment in the Isle of Skye when the vessel was almost lost forever. But after some urgent repair work and the salvage of valuable equipment ‘Odin’s Raven’ set sail once more and was finally welcomed into Peel by huge crowds of onlookers, escorted by ‘HMS Odin’.

Nigel punctuated his talk with videos and photographs before leading his fascinated audience to see the vessel, now housed within the ‘House of Manannan’, for an extended question and answer session.

Although this remarkable sea voyage was undertaken more than 30 years ago members of the crew still gather to reminisce, and ponder on their once in a lifetime adventure in 1979.