There is a corner of a foreign field… 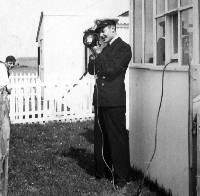 I received this email today:

I am the nephew of Douglas Redmayne who was born in Nebraska, his name lives forever on the war memorial in Castletown on the Isle of Man, he was killed at the tender age of 20.

I attach this link for the information of the Nebraskan Manx Society.

Update: Douglas was born in Nebraska but moved to ‘Oakbay’ on Vancouver Island British Columbia before the family moved to the Isle of Man.

This is the story:

The circumstances surrounding the last moments of a young RAF pilot officer’s life, after he was shot down over Germany in July 1940, have been revealed, thanks to the internet.

Douglas Redmayne was 20 when the Hamden bomber he was piloting on a night raid over the Keil Canal was caught by flak from guns placed near a navy yard.

The plane crashed on the banks of the Schwentine River and all four crew members perished. They were buried in Keil cemetery.

Douglas’s family in Bowling Green Road, Castletown, got the first inkling he might be in trouble when they tuned in to listen to Lord Haw Haw, the German propaganda broadcaster.

Douglas’s nephew, Roy Redmayne, explained: ‘My mum Olive listened to the radio and heard Lord Haw Haw, he said: “Last night your boys got a battering. Four came down over Keil.”

‘A week later a telegram arrived confirming he was missing presumed dead.’

The family had moved to Castletown from Canada in 1932 after Douglas’s father died.

Douglas was educated at King William’s College and, being a US citizen — he was born in Nebraska — had no obligation to do military service.

He joined 83 Squadron of the RAF along with Guy Gibson, who later formed 617 Squadron of Dambusters fame.

Roy, who lives in Castletown, was raised on tales of his uncle’s heroism and knew the site of his grave — again thanks to internet research — and had visited it on the 60th anniversary of his death with Roy’s son, Stephen. But the family did not know the exact circumstances surrounding the pilot’s death until last month, when Roy’s brother Robyn found more details on a new website.

‘The 2000 trip was everything the family could do really, at least a representative of the family was there,’ said Roy.

‘If anybody is looking for anybody they should contact the Commonwealth War Graves Commission.

‘The information comes up with rank, squadron, where the cemetery is and where the grave is. I got in touch with the RAF, but my uncle’s records were destroyed by fire. That was the end of our inquiries.

‘Robyn kept going. He got the last piece of the jigsaw in September, finding information through a German website.’

The website contains details surrounding such tragedies and there are even photographs of the mangled wreckage of the Hamden with the sad, graphic description that the whole crew, including Douglas Redmayne, had suffered ‘destroying of the whole body’.

Finding such information was ‘bitter sweet’, said Roy, but at least it had brought closure.

‘The final part of the jigsaw is now in place so we know the full story of Pilot Officer Douglas Redmayne RAF, a Castletown man, who died 67 years ago in a far off foreign field,’ he said.

‘Douglas Redmayne is remembered on the war memorial in Castletown along with all the brave young men of the parish who gave their lives so that we could enjoy our freedom.’