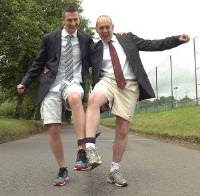 Well, it makes sense. Who else should have the record for the bigger three-legged race?

Damian, who works at Barclays Wealth in Douglas, set himself a challenge of breaking a world record when he made his New Year resolutions this year. I started to look at group events and found out that the current record for the three-legged race stands at just 380 people or 190 pairs. ‘Then I thought Three Legs of Man – three legged race.

‘Wouldn’t it be great if the Isle of Man held this record?’

The Guinness world record is currently 380 people or 190 pairs but there are other record attempts being planned so Damian wants to make sure the Isle of Man gets the record by getting as many people to sign up as possible. For the record to be ratified, competitors have to complete a 250 metre course.

The event will also raise money for the Wish Upon a Dream charity which helps grant terminally ill children their final wish. A target of £25,000 has been set with Barclays Wealth matching the final sum pound for pound.