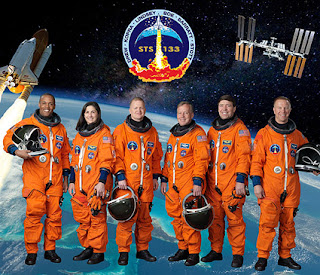 So here we sit, in Florida at Cape Canaveral, waiting for Wednesday afternoon and the launch of Space Shuttle 133 which will be Nicole Stott’s second space launch. As the launch has been delayed by two days, the NAMA Secretary and 2nd V.P. are sitting it out on fishing pier bars and at seafood joints.


In case anyone out their lives under a rock or worse, doesn’t read this blog, Nicole is Manx by marriage. Her husband, Christopher Stott is the head of ManSat, a key space company and he’s also the IoM’s Honorary Representative for Space Affairs (and super nice guy). Yesterday — in true Manx fashion — we bumped into Brian and Liz Stott, Chris’ parents, in a restaurant.

They say the Manx can’t go anywhere without meeting a countryman. It’s certainly true for me.


Photos to follow if the NAMA press corps can stay focused long enough.

Discovery will deliver and install the Permanent Multipurpose Module, the Express Logistics Carrier 4 and provide critical spare components to the International Space Station. This will be the 35th shuttle mission to the station.