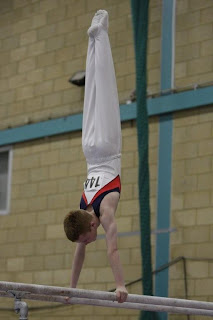 Tony Duchars has rapidly become one of the most outstanding Island gymnasts in recent times and during the last eighteen months has travelled almost weekly to Manchester where he worked with the Elite Performance Gymnasts. Although this level of training is not available on the Isle of Man, the improvement in Tony’s performance was realised very quickly as his results swiftly improved.

Formerly a pupil at Scoill Vallajeelt Tony has now been offered a place to train with high performance coaches alongside some of the UK’s top gymnasts at Huntingdon Olympic Gymnastics Club, and now attends The Ley’s School in Cambridge as a boarder on the recommendation of his coach in Manchester. The school, which has a strict selection process, has an excellent record for assisting top athletes to fulfil their potential whilst ensuring that their academic studies don’t suffer.

Tony began competing in gymnastics during 2004, but had shown dedication and commitment to the sport from an early age, showing both a positive attitude and motivation towards training. He began with pre-school gymnastics at Ellan Vannin Gymnastics and at the age of 5 had already been placed as runner up in a UK competition, which spurred Tony on to take the winning trophy in the following year. His talent was easily recognised and at the age of 7 Tony became the youngest child to be asked to join the Isle of Man squad. Tony’s involvement then inspired the organisers to continue to bring in younger gymnasts. Despite his age Tony was able to win against much older boys and he has won every Isle of Man Championship since. At just 12 years old Tony’s remarkable talent has ensured that he is now recognised within the top 5% of the talent pool in the UK, requiring that he trains with a high performance coach and other boys working towards the same goal.

He has been training alongside Olympic Bronze medalist Louis Smith and the 2009 World Championship silver medalist Daniel Keatings, and only missed out on a bronze medal by 0.2 marks in the 2009 Under 12 Men’s British Championships. Tony expects to be on the podium during 2010.

His competition programme for 2010 is lengthening rapidly, representing the Isle of Man at both the Celtic Cup in Wales and at an Invitational Competition. Tony will also be representing Huntingdon Olympic Gymnastics at the London Open, the National Elite Grades and British Championships and hopes to represent the East region of the UK at the National Performance Grades in Birmingham. Looking further ahead Tony hopes to be chosen for either the Commonwealth Games or the Olympic Games in the foreseeable future.

Although gymnastics may be his first love Tony has always been a high achiever and recently completed his Grade Three in piano, devours books, loves swimming and has recently challenged himself to learn juggling.

However, Tony’s education does come at a price and it is difficult for his family to find the resources needed for this once in a lifetime opportunity. If any organisation can offer financial support at this very important time for Tony’s development please contact his mother, Clare Duchars, by phoning 07624 470364 or email clare.duchars@manx.net