Organised by Michael Heritage Trust, the traditional Oie’ll Verree held at the Ebenezer Hall in the village follows a tried and trusted format, which in the age of contemporary entertainment can still muster a full house.

Members of the audience were welcomed by the Chair of Michael Heritage Trust, David Corlett, before returning compére, Zoë Cannell, took to her feet to act as lynch pin between the varied acts on the programme. 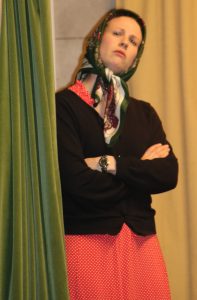 The evening always gets underway with a rousing rendition of While Shepherds Watched Their Flocks by Night before all eyes turned to the stage for a night of Manx entertainment. Music, recitation, song and dance dominated the programme, with Erin Loach and Paul Costain providing several local songs in both Manx Gaelic and English, Kirsty and Katie Lawrence captivating the audience on fiddle, whistle and cello, and some of the youngest members of the dance group Skeddan Jiarg stepping out onto the compact stage. They were joined by Marilyn Cannell on piano, who also provided an improvised song, self-penned poetry from the current Manx Bard Annie Kissack and Zoë Cannell and a selection of magic tricks with Island magician Lexi Dernie. 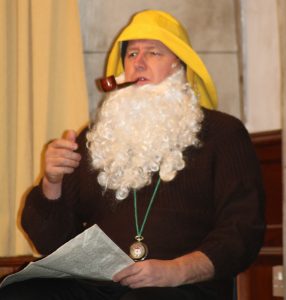 The annual presentation of the award Yn Gliggyr was made during a short interval to Mike Clague, before The Michael Players RBV presented the Manx dialect play In the Doctor’s Waiting Room written by J. E. Q. Cooil during the 1950s; a perfectly crafted comedy which concentrated on the varied suggestions as to how a pan might be released from the head of a small child – with a twist in the tail.

But the evening closed as ever with the aptly named Arrane Oie Vie ( Goodnight Song) and a sumptuous home-made supper.