Tree stump in Sulby valley causing quite a stir

Kelly McCarthy Posted on May 12, 2010 Posted in Uncategorized 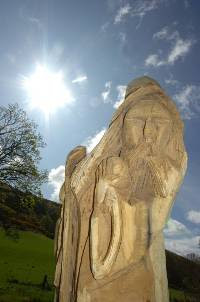 TREE-MENDOUS: Tree surgeon Nick Barlow with the 12ft high carving of a wizard created from a tree stump in a field in Sulby valley. It took him two and a half days to complete the masterpiece, which has since been turning heads.

Tree surgeon Nick Barlow – more at home cutting down trees than preserving them – has performed his magic to turn the dead tree into a carving of a wizard.

The 12ft-high carving is only Nick’s second attempt at turning a tree into a piece of artwork. His first attempt was a carving of a face, into a tree stump in the same field, owned by his friends Sue and Gary Quilliam.

Nick, of Old Milestone, St John’s, explained: ‘It’s a friend’s tree which has been stood dead for about five years. ‘Sue loves trees, and when she saw the face I had done she asked me to carve a wizard. More at IOMToday 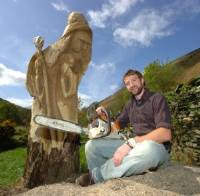