Typical – the weather is great beforehand and then it rains for the races. Boo hoo! And today is the TT Zero Electric bike race where some Americans stand a real chance of victory. Being from Portland they’re probably used to the rain though. 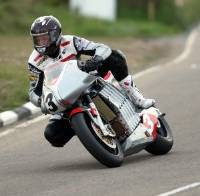 PORTLAND-based team Moto Czysz and their rider Mark Miller confirmed their position as race favourites for the 2010 TT Zero Electric bike race at the Isle of Man TT races after lapping at an average speed of 94.664mph. The team recorded the fastest ever lap – albeit an unofficial lap record as it is not recorded during a race – for an electric bike around the famous mountain course, beating the 2009 race record of their closest challengers Team Agni who recorded 87.434mph average lap speed while winning the 2009 race.

Moto Czysz led from the start of the session and were already over 17 seconds ahead of their nearest challengers ManTTx (James McBridge) at Glen Helen with defending champion Rob Barber and Team Agni third fastest. Martin Loicht’s HTBLAUVA – XX Project, Kingston University (George Spence) and Mark Buckley and Team Ecolve were also timed at more than 60mph

Team Agni passed the Manx team before Ballaugh but were unable to match the speeds of the MotoCzysz team who were clocked at 102.566mph to Ramsey, having been recorded at a speed of 131.1 through the Sulby Speed Trap. Barber’s Team Agni also clocked over 100mph at Sulby.

The Americans continued their impressive charge and were still just below the 100mph (99.974mph) at the Bungalow and eventually finished over three minutes ahead of their nearest challengers.

Team boss Michael Czysz believes that the team could still claim the £10,000 prize that the Isle of Man Government will award if a team can break the prestigious 100mph average lap speed around the course but acknowledges that it is an uphill task.