Kelly McCarthy Posted on May 6, 2009 Posted in Uncategorized 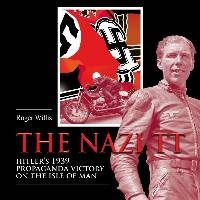 “The Nazi TT: Hitler’s 1939 Propaganda Victory on the Isle of Man” – sets out to discover if the victorious team really was fuelled by the Nazi propagandists or whether it was, as claimed at the time, ‘just motorcycle sport’.
Book previews from the publisher say: ‘In The Nazi TT, veteran motorcycling journalist Roger Willis has blended a unique cocktail of politics, history and balls-out bike racing. His book explains how Hitler’s henchmen turned German motorcycle sport into a paramilitarised adjunct to the Nazi Party’s evil ideology during the 1930s and tested their might on the TT Mountain Course. ‘It reveals who the racers and their Nazi puppet-masters on the Island in 1939 actually were, what they achieved and what happened to them afterwards. You just couldn’t make this stuff up . . .’
The 104-page hardback book is published on May 18 and will cost £10.99. More here.