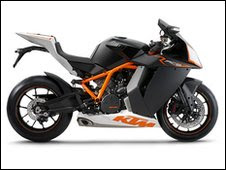 Austrian manufacturer KTM will make its debut on the Isle of Man’s Mountain Course at the 2010 TT.

MARTYN QUAYLE: The tourism minister said his department was still finalising the budget for this year’s TT clean emissions race but that, in order to promote and run the event, he expected the budget to be between £100,000 and a £150,000.
Going it alone on the green TT could save taxpayers up to £95,000, the House of Keys was told. He defended the decision to jettison TTXGP and to create a TT Zero event in its place. Questioned about damning headlines in Motorcycle News about ‘playground politics choking electric racing’, the minister hit out at inaccurate UK press coverage. IOM Online
TTXGP boss Azhar Hussain has refuted government claims that he elected not to take part in this year’s zero emission motorcycle race during the TT Race Week.

A government statement last week said Mr Hussain was not prepared to sacrifice a rival event in Paris during TT fortnight in order to be at the TT, leaving organisers with no option but to organise the event – now called TT Zero – themselves. But Mr Hussain has told the Examiner he is extremely sorry not to be involved.
Thanking those who had supported his enterprise last year in the inaugural event, Mr Hussain added: ‘I can confirm the question of Paris or issues of financial packages were not factors in the decision-making and am disappointed that it is being suggested so. ‘We remain surprised about the decision as we did everything possible to make this happen.’ IOMToday