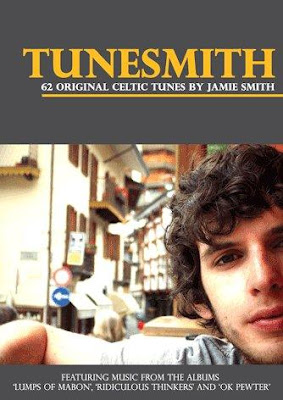 Manx traditional tunes pop up all over the world these days, as more of the wider population discover that we retain a thriving and vibrant culture of our own. One man who is now firmly connected to the Island, in more ways than one, has now brought together sixty two of his own original compositions into book form.

‘Tunesmith’ is an appropriate title for the new publication issued by Welsh traditional musician Jamie Smith. Compact and clearly expressed, Jamie’s repertoire includes a large number of tunes reflecting his links with the Isle of Man, both musically and personally. Most of these are easily spotted by the reference notes supplied by Jamie, or a quick glance at the song titles.

Part of the Welsh band ‘Mabon,’ he has visited the Island on numerous occasions to play at gigs and concerts, and although living in Wales has now married a Manx girl.

A talented accordion player, Jamie is also a prolific composer. His knack for writing tunes began almost a decade ago, and his love of Celtic music comes through very clearly. He is unafraid to experiment and happily moves from jigs and reels to Breton an dro and Galician muiñera. However, inspiration is also drawn from other examples of European tradition.

Aimed at both beginners and experts alike, the compositions reproduced in ‘Tunesmith’ vary in difficulty and cover a wide range of keys, tempos and rhythms.

For those people on the Island who are familiar with the Welsh band ‘Mabon’ they may also recognise many of the tunes. Two thirds of the compositions reproduced here have been recorded by the band over the course of their three albums. In view of this they have been grouped together in their respective sets as played by the band.

Jamie has been playing music with ‘Mabon’ for several years, but first started playing the accordion seriously in 1998. Teaching himself using a combination of CDs at home, gigging with the band and accompanying local Welsh folk dancers Penyfai, Jamie took the lead creatively with the band. As their unique sound developed he began to compose his own tunes and now writes most of ‘Mabon’s material. Jamie also plays guitar and mandolin and can also turn his hand to song writing and is noted as an occasional singer-songwriter.

Many of the tunes in this book include explanatory notes giving both a glimpse into the life of a musician and the topic of the tune. Jamie also provides helpful points for the musician in respect of harmony and ornamentation, with tempo and metronome markings. Mp3 recordings of Jamie playing tunes from his book are also available on request, for those who wish to hear how he plays a particular tune.

Married to Gráinne Joughin from Peel, a number of tunes were inspired by her, including ‘On St. Patrick’s Isle,’ a tune composed and played for her to walk down the aisle at their wedding. Gráinne has also designed the cover of her husband’s new book, and is now pursuing a career in the film industry.

‘Tunesmith’ packed with sixty two original compositions is available via the ‘Mabon’ website at £12.50.