A pod of 20 Risso’s dolphins have been spotted off the coast of the Isle of Man in recent weeks. The rare dolphins were sighted off the southern coast of the island by members of the Manx Whale and Dolphin Watch. Conservationists have been recording the number of sightings to better understand their habits and behaviour. 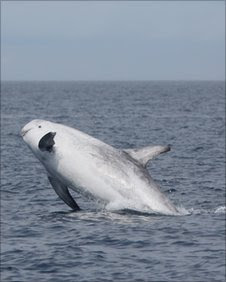 Tom Felce from the MWADW told BBC Isle of Man: “Dolphins have been spotted four years running indicating the importance of Manx waters to them.”

The number of sightings however is a third down on 2009, with just 20 compared to 60 in previous years. Any sightings of Risso’s dolphins or good photographs should be reported to the Manx Whale and Dolphin Watch . The group aims to provide a detailed picture of dolphin, whale and porpoise numbers in Manx waters.