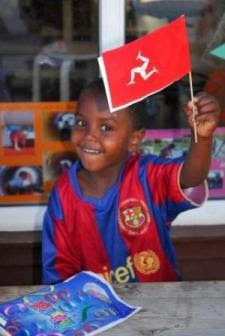 BONNAG was on the menu as a group of nursery school children enjoyed their own Tynwald Day celebrations in Norway last week.

The youngsters baked the traditional Manx bread during a morning of Isle of Man-themed activities at the Muldvarpen kindergarten in Stavanger. The event was organised by Juan Cottier, the Isle of Man Government’s honorary representative in Norway, and his wife Katerina.

Children, parents and teachers were greeted at the school gates by Manx fiddle player Juan Maddrell and received a message from Chief Minister Tony Brown MHK which had been translated into Norwegian. Each of the 34 children made their own individual bonnags decorated with raisins and chocolate chips, as well as a bigger one for the teachers.

While the bread was baking in the oven, the headteacher gathered everybody together to explain the Isle of Man’s strong historical and cultural links with Norway. The children then sat down to tuck into their tasty Manx bonnag, topped off with a dollop of Norwegian jam.

‘It is always a pleasure to hear of people in other parts of the world joining in our Tynwald Day celebrations and learning more about the Island’s history and traditions. The work of our honorary representatives is invaluable in terms of raising awareness and understanding of the Isle of Man and I’d like to thank Juan and his family for their sterling efforts.’ The Cottiers also hosted an open house at their home in Stavanger city centre on July 5. Friends, neighbours and business contacts were all invited to enjoy an afternoon of Manx food and entertainment. Kippers, queenies, Loaghtan steaks and 10 different Manx cheeses were served up to 50 guests who also watched a DVD of the TT Races and listened to CDs by Breesha Maddrell.

Juan said: ‘The gathering was a great success and the Isle of Man produce attracted plenty of compliments. In the spirit of a traditional Manx tay-fight we finished up at about 1am! I am most grateful to the many Isle of Man companies and individuals who contributed to the Tynwald Day celebrations in Norway, including the IoM Government, Island Seafare, IoM Post Office, MHF Music, IoM Creameries, Duke Marketing and Manx Loughtan Produce.’