Kelly McCarthy Posted on May 24, 2012 Posted in Uncategorized 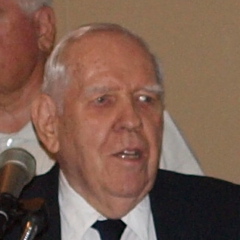 Bob is the Emeritus Governor of the North American Manx Association, a role created for him in honor of his longevity within the organization and his lifetime commitment to NAMA and all things Manx. It was his donation that financed the move of the T.E. Brown window to its new home in the Manx Museum; and his donation that launched the North American Manx Museum in the University of Wisconsin – Platteville where we will convene this August for the Convention.

On Saturday 19th May, Bob had a heart attack on his way to a BigWill meeting. He was taken to the Centegra Hospital, Fort Henry WI, where he was admitted to the ICU and spent several days receiving  critical care. Yesterday we received this positive update from his niece, Carol Pilgrim.

I spoke with Uncle Bob today (yes, you read that right)!  He sounded weak and out of breath, but we had a bit of a conversation.  He couldn’t hear me very well because of the phone they gave him.  He told me he was shocked 3 times by the EMTs and 15 times in the ED.  I don’t believe this was from memory, but from what he was told.  It proves to me that his mind is as sharp as always.So obviously, he had the ventilator removed today.  The nurse I spoke with said he was very coherent.  He is receiving antibiotics and will likely remain in ICU for another day or two.