Vel oo mie? Are you well? 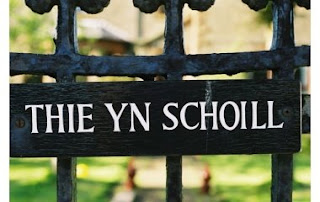 In Manx, House (of) the School.

Two of the most common are:

Kanys ta shiu? The way to say “how are you?” politely or to a group of people.

Kys t’ou? An informal version of the same used with friends, family or children.

But there’s another way to get there, using the verb “to be.”

Therefore, if we want to ask someone “Are you well?” we say:

Vel oo mie? That’s “are” followed by the personal pronoun “you” and “well.”

Remembering the pronouns and vocabulary from the last lesson, we can use “ta”, “cha nel” and “vel?” to string together some basic sentences.

Note that the verb “to be” comes first in the sentence — Manx sentence order is Verb, Subject, Object, unlike English is Subject, Verb, Object.

After someone’s enquired about your health, it’s only polite to thank them, which we do by saying gura mie eu, if we’re being formal, and gura mie ayd, informally.

Remember that Manx, like many European languages, uses the plural form in polite situations as well, when talking with strangers or social superiors, for example.

The last is not a name, but a noun – dooiney, man. “Whooiney” is used in expressions in much the same way we might say “man” or “dude” (depending on your age) on this side of the Atlantic. A Manx equivalent, according to the folks at LearnManx.com, is “yessir.”

In this case, James has just completed the Parish Walk:

And I am too. Here’s wishing you all oie vie — good night, gura mie eu.