Victory at Wanganui in New Zealand on Boxing Day 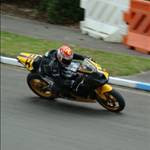 In June last year, Shaun Harris cheated death in the Isle of Man Tourist Trophy race, crashing his 1000cc Suzuki at 230km/h on the final lap on the 37-mile (60km) circuit.

Race officials and medics who came to his rescue at the time didn’t give him a chance and their feelings were echoed by doctors at the hospital.

He broke both arms, both legs, some ribs, his pelvis and lost his front teeth in the smash and was in a medically induced coma for several days.

Read this article in the New Zealand Taranaki Daily News about Shaun’s latest race in the Southern Hemisphere’s verson of the TT. Click on the photo to go to the Manx Radio site.