Marauding Vikings invaded the west coast of the Island this summer, setting up camp within the historic surroundings of Peel Castle, where they spent time educating visitors and school children about the Viking way of life. 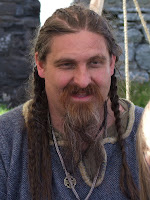 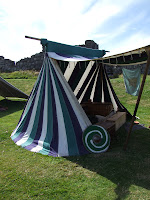 The venue, provided courtesy of Manx National Heritage, was bathed in glorious sunshine with curious bystanders invited to join in the retelling of the sagas, or learn more about Viking daily life and survival. Each tent revealed a new occupation with men and women in authentic costume keen to pass on knowledge of their chosen trade.
Cooking and craftwork became a standard female occupation, but the Vikings were buoyed by a very healthy diet, with a plentiful supply of fish, no sugar (except for natural honey) and oatcakes for fibre and nourishment. Modern day stimulants such as coffee and chocolate were yet to be discovered. Seasonal fruit, vegetables and nuts were augmented by a local supply of meat, although this would be naturally limited in the spring. Additionally herbal teas provided both refreshment and home-made remedies for medical problems. 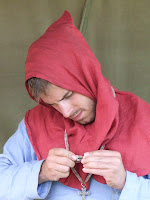 But the menfolk also had their roles to play, providing a safe haven for their families. Being gifted craftsmen they fashioned pieces of delicate jewellery and carved wooden artefacts. However, their image as a fighting race of people was tempered by times of relaxation with assorted games providing an antidote to periods of combat, demonstrated here by an example known as Kubb.
The romantic appeal of Viking life meant that numbers of people available to perform were at a premium, with nine re-enactment gatherings scheduled during the same weekend in the British Isles alone. However, re-enactors did travel to the Isle of Man from Scotland, England, Wales, Denmark and Norway.
Junior School pupils from all over the Island visited the Viking encampment to find out more about their daily lives, feeling part of village life as they listened to stories huddled in blankets for warmth and protection.
‘Vikings of Mann’ are always on the lookout for more recruits and would welcome anyone, no matter what age, to come along to their meetings at 8.00pm on the first Wednesday of each month at the Manx British Legion branch in Douglas Street, Peel. 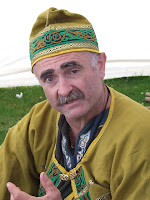 These meetings give everyone an opportunity to learn and develop new skills, particularly in the winter months. These might range from carving wood and bone to knarl binding, needle knotting and buckle making. Male recruits also have the chance to double-up as warriors, but some of the womenfolk might be more interested in a new book of costumes recently delivered from Borg in Lofoten, Norway, which will provide an added incentive for re-enactors on the Isle of Man to create new costumes. 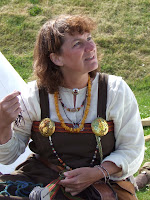 New members are encouraged to come forward with suggestions as to which skills they would like to explore, but in the meantime the society is keen to hear from anyone who has the skill of a metal forger and is willing to pass those skills on to the group.
If you would like further information please contact Margaret Gunn on 410968, mgunn@manx.net or through the Vikings of Mann Facebook page.
Valerie Caine
© July 2011