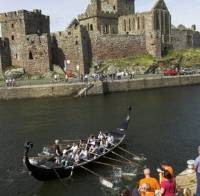 VIKING longboat races are being held in Peel this Saturday (July 17). There are 840 rowers split into 84 teams taking part. They must row from the harbour mouth to a bouy in the bay and back as fast as possible.

The race categories are men, women and mixed. Winners, second and third placed finishers in each category receive a sum of money to donate to their chosen local charity – made possible thanks to the event’s main sponsor Royal London 360.

The championship title itself is decided on handicap, whereby the fastest teams each have a handicap imposed, which is calculated on the quickest times recorded last year.  Champion last year was the Nothern Young Farmers mixed team, who will be taking part again.

‘They were out the other night (training] and they were flying!’ said Jimmy Lee, secretary of the races organising committee. It’s going to be a good day. There’ll be some teams in fancy dress, some taking it seriously and some there for a laugh.’