Valerie Caine Posted on May 29, 2017 Posted in Culture 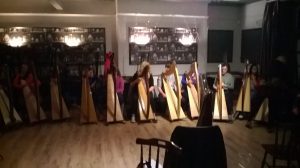 Both groups joined forces to rehearse their joint sets at the Mitre Hotel in Ramsey in preparation for their forthcoming concert, but managed to fit in a visit to the House of Manannan in Peel. After their brief sojourn in the west everyone returned to the Mitre in Ramsey for a mighty music session, with more than thirty musicians from both groups taking advantage of the weekly Irish music session.

During the weekend workshops were also held at the Youth Arts Theatre in Douglas, where some of the local harp players enjoyed one-to-one tuition, followed by a concert featuring Croan yn Tead, Fiana Ní Chonail and the Lissenhall Harp Ensemble. Fiana played a selection of tracks from her debut CD Dathanna an Cheoil and was accompanied on selected sets by local bodhrán player John Corlett of Mactullagh Vannin. Croan yn Tead and the Lissenhall Harp Ensemble later joined forces to bring the ev 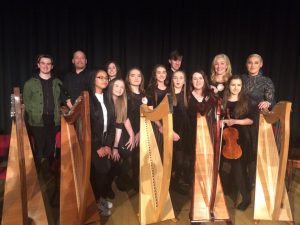 ening to a close.

Event organiser Peddyr Cubberley said, “The groups and their entourage held a social night at the Mitre Hotel in Ramsey and were treated to an excellent buffet, followed by yet another music session. This was a great time to get to know one another, forge friendships and have a great night of ceol agus craic – music and fun!”

As their extended visit drew to a close, the visiting Irish musicians enjoyed a tour around Cregneash, followed by a final concert in Castle Rushen.

Croan yn Tead would like to thank Carl and Selina Joughin and the staff of the Mitre Hotel, Fiona Helleur and volunteers at the Youth Arts Theatre, Chloë Woolley of Culture Vannin and Manx National Heritage.