↓ Skip to Main Content
Home › Uncategorized › What the heck is the Madison?

What the heck is the Madison?

Manxman Mark Cavendish will be in the Madison race on August 19th.
Eighteen teams of two riders race around a banked, wooden track for an hour of handoffs, sprints and bumps.
You are not allowed to knock your rivals off the track but in the Madison you can expect to see a lot of elbowing and shoulder barges as the riders fight to get in the best position.
The event is named after Madison Square Garden in New York where cycling around an indoor track was made popular at the end of the 19th Century. 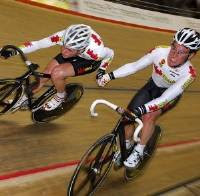 If you look at the photo, try and follow these rules:
RACING LINES: The black line on the inner part of the track marks the shortest distance around the velodrome. Above the blue ‘stayer’s line’ is where Madison riders will be when not actively in the race. Here, Peter Kennaugh is seen dropping down below the blue line to be thrown into the race by Mark Cavendish. The two are pictured on their way to victory in the 2008 British Madison championship at the Manchester Velodrome, UK.