A recent exhibition at the Manx Museum in Douglas reflected upon the work of the artist William Hoggatt, who spent many years living on the Isle of Man.

Born and educated in Lancaster, Hoggatt spent more than fifty years living and working on the Island and was said to have described himself as ‘almost a Manxman’. 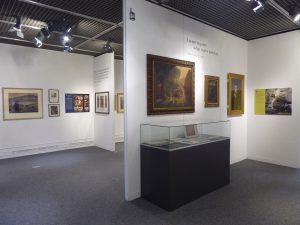 The son of a joiner, his flair for art won him a scholarship to the Royal College of Art in London, which he declined on the pretext of wanting to work freely. He then became an apprentice with a stained glass manufacturer, but continued his art studies at the Storey Institute in Lancaster. His work was noticed by Herbert L. Storey, son of the founder of the aforementioned institute, who generously paid for the young artist to study at the L’Academie Julian in Paris, under the watchful eye of Jean Paul Laurens.

Returning to England, Hoggatt rented a cottage at Caton, near Lancaster and began a full-time career in painting – including a brief spell at the Tate Gallery in London.

A significant turning point came when he met Leonard Archer, who invited the artist to his home at Chalfont St Giles, where he met his host’s sister Dazine. Their resulting marriage was strongly opposed by both families, so they eloped to the Isle of Man where they were married at Kirk Christ in the parish of Rushen and moved to Glendown in Port St Mary. 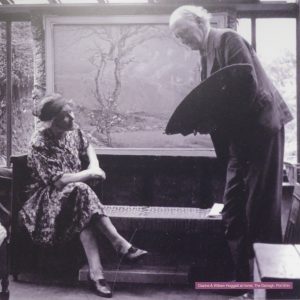 Hoggatt worked with oils, watercolours and pastels, exhibiting both at home and abroad in a number of respected galleries, and was subsequently elected a full member of the Royal Institute of Painters, the Liverpool Academy and the Royal British Colonial Society of Artists.

His first one-man exhibition at the Hampstead Art Gallery in London, included sixty paintings of the Isle of Man, many of which were sold during the exhibition.

William and Dazine Hoggatt remained faithful to the south of the Island, and in 1926 moved to The Darrag in Port Erin, where they remained until their deaths.

Hoggatt also exhibited locally with the Isle of Man Artists’ Exhibitions during the 1930s and later with the Mannin Art Group, where he was vice-president. Locally he also won a competition to design a commemorative stained glass window in celebration of the Island’s poet T. E. Brown, designed travel posters and the programme cover for the Festival of Mann. Two of his paintings were presented to members of the British Royal Family, whilst a third was bought privately. 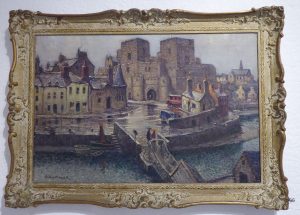 William Hoggatt died in 1961 and was buried in Rushen churchyard – upon his gravestone written ‘He loved the Island dearly and revealed to its people its wondrous beauty’.