Kelly McCarthy Posted on November 10, 2011 Posted in Uncategorized
For the Attention of Mr Jim Kneale Jr, President, Washington DC Manx Association
Dear Sir,
I am writing to tell you about a book shortly to be published on the Isle of Man by Lily Publications, about the Manx inventor, explorer and poet William Kennish (1799-1862).
William Kennish was the first man to invent an effective means of concentrating the gun fire of a broadside from a ship of war in 1827 – the forerunner of the modern gun turret; he discovered the first route to link the Pacific and Atlantic without locks in 1854, and his son William Jr was chief inspector of the construction of the concrete pedestal for the Statue of Liberty – so you could say the definitive symbol of American Freedom and Liberty has a Manx foundation! The book includes 180+ illustrations including one of both of Kennish’s sons standing on an incomplete pedestal. 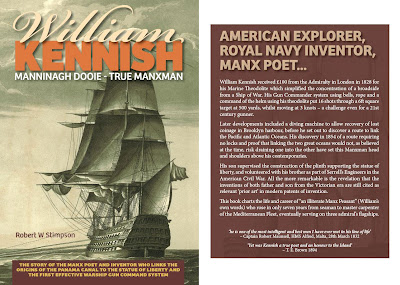 Thanks to three separate lines of Kennish’s descendants living in the US today I have been able to compile a complete record of William’s inventions, explorations and poetry, and provide the full details of the US Government survey organised on the direction of President Buchanan to confirm his expeditions, plus the link between Kennish and the foundation of San Diego.  Kennish was the first Manxman to be mentioned on the front page of the New York Times during his exploration of New Grenada (now called Columbia) and this exploration influenced the final placement of the Panama Canal.
Published  by Lily Publications of Ramsey, with the assistance of the Manx Heritage Foundation it will be available from 21st November. 170mm x 250mm x 45mm, 620pp hardback, £26.00; ISBN 978-1-907945-08-3.
It provides Kennish’s lifetime and writings in three distinct but cross-referenced sections: part one is a biography from his early life in Maughold and then as an apprentice in Douglas, through to his Navy career, awards, patents and expeditions into South America leading up to death in Brooklyn in 1862; part two is a full description of his inventions and technical writings in America and England, including a reproduction of both his book on Concentrating a Broadside and the earlier article about the same topic published by the (now Royal) Society for Arts, Manufactures and Commerce of London. The third section publishes cronologically all of his poetry from the 1830’s including many discovered in the USA and  some variations on those included in his book of poetry called Mona’s Isle (originally published in 1844) which is also included.

Included are approximately 180 drawings, figures, photographs and paintings of the ships he served on, the areas he explored and the inventions he developed. Over 40 of these are in colour. A comprehensive index is also included.

The cover (image attached) is taken from the fronticepiece to William’s own “Concentrating a Broadside” book of 1837.

I hope you will forgive such a bold presentation of this from the author but it has been 7 years in the writing and I am keen to see the  print run of 500 go to enthusiastic Manxies!