Kelly McCarthy Posted on June 10, 2011 Posted in Uncategorized
As we celebrate the centenary of the World Manx Association this would be an opportune moment to reflect on the words of the Manx poet T. E. Brown, who gave his last public lecture on the Isle of Man at Castletown in 1897, where he encouraged the people of the Island to welcome those fellow Manxmen and women who were returning to our shores after many years abroad, but little did he know what impact his words would still have more than a century later. 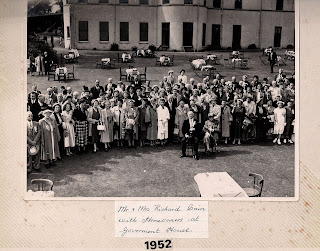 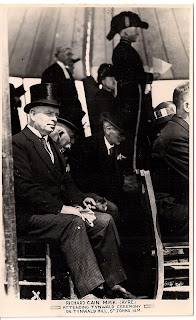 With the prolonged emigration of Manx people to other lands, travelling in the hope of a better life to the US, Australia, South Africa and England, many found solace within the embrace of other Manx folk who were already settled in their new home. Despite being some distance from the land of their birth they clung together as a community, providing accommodation and help in locating employment for those that followed in their footsteps from the Isle of Man. From these convivial beginnings evolved the numerous Manx Societies which still flourish worldwide with the earliest recorded branch formed in Cleveland, Ohio, in 1865.
But in amongst the audience listening to the words of T. E. Brown in 1897 was local entrepreneur Richard Cain, who became a long serving MHK for the constituency of Ayre. A decade later Cain and his wife attended an event organised by the Liverpool Manx Society where he spoke of linking the Manx Societies together and the thoughts of the poet. 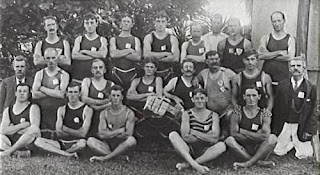 Nothing happened until 1911 when a favourable meeting was held between Cain and other interested parties which resulted in the formation of the World Manx Society. The society’s inaugural meeting was attended by a large number of expatriate Manxmen from around the globe, who elected a sterling body of 24 committee members and Richard Cain as their first President. The name of the organisation was also changed at this point to the World Manx Association to reflect their connections with the growing number of Manx Societies.
The annual organised ‘homecoming’ was first proposed in 1912 to be implemented in the following year, but this was stalled by lack of time and abandoned altogether during World War I. 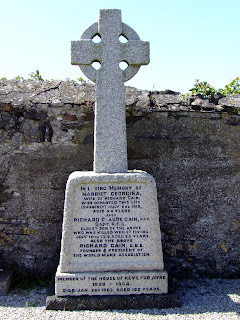 But eager to move forward with their plans the committee pressed on, asking Frank Graves, an Architect in Manchester, but formerly of Peel, to design a unique badge for the association which proved extremely popular. His distinctive design is still used along with the motto ‘Ellan Vannin dy Bragh’ adapted from an original suggestion by the Winnipeg Manx Society.

Members of the World Manx Association proved to be the movers and shakers of their day pushing for an easily recognisable Manx flag and campaigning for a national holiday on Tynwald Day. They also instigated an annual celebration in memory of T. E. Brown, which although initially a little ambitious, survives today as a memorial held around about the anniversary of the poet’s death.
Now, a centenary since its inception, the World Manx Association has organised a host of activities to be enjoyed by both visitors and residents. Homecomers will be treated to a busy schedule of events which will include the Annual Gathering and Dinner at the Sefton Hotel with live links to Manx Societies around the world. During their weeklong stay they will also have the opportunity to join a selection of nostalgic tours, which will include a number of venues linked to the formation and history of the World Manx Association, take part in the Homecomers’ Service at The Nunnery, participate in the Tynwald Day celebrations and enjoy a special Centenary Concert at the Villa Marina. Further details about the centenary celebrations and the sale of commemorative merchandise can be found on the association’s website.
www.worldmanxassociation.co.uk
(Courtesy of Manx Tails)
Valerie Caine © June 2011