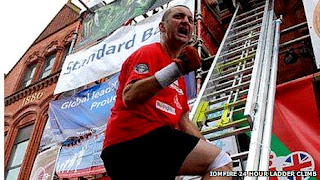 Ten firefighters in the Isle of Man have succeeded in their world record attempt for climbing the greatest distance up a ladder in 24-hours.
They toppled the current record held by firefighters in New Zealand who managed to climb a 15m ladder 10,959 times in Auckland in 2005.
The Manx firefighters passed the New Zealanders’ total just after 14:10 BST, finishing at 15:00 with 11,417 climbs.
The record is pending official approval from the Guinness Book of Records.
The Isle of Man team last held the record in 1998.
Their record bid meant that they had to climb the 15m ladder 46 times a minute.
The distance covered to break the record was 109.59km (68.1 miles).